If you have been attentive to the night skies lately, you've most likely noticed a very bright orange/red object in the evening hours toward the east. That is Mars, the Red Planet, and we are fast approaching Mars for a close alignment that will bring us to the closest approach in over two years, culminating on October 6th. It will remain a distinctive evening object for the coming months, but the month of October is when you will see Mars shining at its brightest. 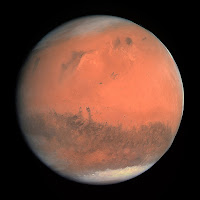 Every 26 months we have a close encounter with Mars. The last one, in 2018, was even closer than this year. However, for those of us in the northern hemisphere Mars was low on the horizon for most of the night. For the 2020 close encounter with Mars, we will get a better view of the red planet, as it will climb higher across the night sky in October and through the end of the year.

In addition to the close approach on October 6th, Mars will be at opposition on October 13th. For more details about opposition, I recommend this Earth Sky article by Deborah Byrd (scroll all the way to the bottom for a great Mars Opposition chart). And if you have a telescope and want to use this close encounter to get a close up view of Mars and some of its surface details, I strongly recommend this Sky at Night article complete with weekly views of what to look for on the martian surface. I will take advantage of this month to try to make out the martian South Pole and some of the surface features with my 5 inch reflector, and I will report on that in a future post.

Update on October 21st: I have tried to view Mars with my 5 inch reflector telescope. Unfortunately, that size telescope is simply too small to provide the resolution needed to see the features on the martian surface. I suspect that a camera and some long-term exposures could help, but without an 8- or 10-inch telescope, I don't think it will be possible to truly see the surface details with the naked eye.

Posted by The Urban Astronomer at 11:15

Email ThisBlogThis!Share to TwitterShare to FacebookShare to Pinterest
Labels: Mars