Posted by The Urban Astronomer at 18:48 2 comments:

Face south in the early to mid-evening and Orion is high in the southern sky. It is easy to identify because of the distinctive "belt" stars and the bright shoulders and kneecaps of Orion. Below the belt hangs the sheath of the sword of Orion, and in the middle of what appears to be three stars is the Orion Nebula. Through binoculars or a small telescope you can clearly see glowing gas and clouds with a distinctive blue hue.
Posted by The Urban Astronomer at 23:05 3 comments:

Venus is a remarkable object in the evening sky. It has been steadily brightening throughout January and will continue through February as it climbs high in the evening sky. Winter skies in San Francisco can yield some of the best viewing. I went out for a look at the western sky at Ocean Beach tonight and although it was cold and breezy, the week ahead is forecast to bring sunny days and crisp, clear nights. With Venus approaching its maximum brightness it is shimmering in the west, dominating the sky and making all other celestial objects pale by comparison. That is, until the Moon shows up!

This week brings the monthly dance of planets and Moon. Find a good western horizon to enjoy the monthly spectacle of the young crescent Moon climbing higher each night. The Moon takes just over 29 days to orbit the earth so from one day to the next it moves approximately 12 degrees against the backdrop of stars. Each evening you can see the change in the Moon's position and Venus serves as a helpful reference point in the sky especially from Thursday 29th to Friday 30th. Dress warmly and enjoy!
Posted by The Urban Astronomer at 22:31 1 comment: 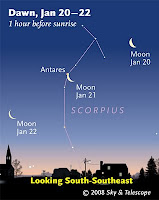 On January 21st, the Moon will cross very near to the bright red star Antares in the constellation Scorpius. Antares is in fact a red supergiant star, thousands of times larger than our Sun but considerably cooler, hence the red color of the light emitted from it. For those in South America, the Moon will appear to pass directly over ("occult") Antares but for us here in San Francisco we will see the Moon and Antares several hours later when they are going to be very near each other but not overlapping.

All of this is visible in the final minutes of the night just before the first light of dawn, but given good weather conditions lately in San Francisco, it should be very visible and quite striking indeed. The view in the above illustration is what you will see from 5:30 to about 6:30 AM, before the light of dawn begins to brighten the sky.
Posted by The Urban Astronomer at 02:30 1 comment:

I never tire of sitting in a domed room experiencing something to do with the universe, and when on the road I try to check out the local planetarium if time permits. While in New York City on business this week, I gave myself a night off and took in a show at the Hayden Planetarium. I was drawn in by a special showing of the PBS documentary The Journey to Palomar with an introduction and discussion by the film's two producers, Todd Mason and Robin Mason.

the region, including the 60-inch and 100-inch reflectors at the Mount Wilson Observatory (a little more than 10 miles line of sight from my home near South Pasadena), and of course the biggest telescope in the world at that time, the 200-inch Hale Telescope at the Mount Palomar Observatory. One time I convinced a couple friends to drive out and camp at Mount Palomar. We visited the observatory during the day and saw the big telescope from the visitors gallery - an impressive sight indeed.

Watching the documentary movie, I was very moved by the story of George Ellery Hale. It is accurate to say that he can be credited with single-handedly driving the creation of the biggest scientific instruments for astronomical research in the first half of the 20th century. He was a man of passion, vision and drive who used his boundless energy to gather the funding needed to build telescopes that had never been built before. Why did he do this? He was in a quest to see more, learn more, and uncover truths about our universe. He took the time to ask hard questions and then set out to create the scientific instruments necessary to get the answers he needed. By creating such amazing places to study the universe, he set the stage for astronomers such as Edwin Hubble to use these extraordinary telescopes to discover that the Milky Way was just one of many billions of galaxies. New theories were tested and validated by the images being gathered. The entire world of astrophysics was turned on its head.

The film producers pointed out that for those of us who grew up during the space race and the moon landings, these events overshadowed the profound discoveries using Hale's big telescopes and in time his notoriety was diminished. But if you take the time to learn about his life and the drive he had to better our understanding of our universe, you will see a story that has relevance for anyone interested in science. He showed that great advances in our understanding of all things comes from inspiration and commitment to an idea. I am motivated to carry on with my work as an amateur astronomer this year, the International Year of Astronomy, so others may be moved to look up and get inspired by what they see in the sky.
Posted by The Urban Astronomer at 17:08 1 comment:

I'll be celebrating the International Year of Astronomy in 2009

400 years ago Galileo crafted a telescope and pointed it up at the sky. He might not have been the first person ever to do this, but he was the first to document his findings. By using visual evidence, he was able to shake up the truths of the world as it was known and understood in the early 17th century.

Now in 2009 it is time for us to celebrate his great work by turning our attention skyward and connecting ourselves with the sky - perhaps with a telescope, with binoculars, or just looking up with the unaided eye and taking it all in. Whether we uncover great new science or just learn the names of a few stars, The International Year of Astronomy (IYA) is already underway. Here is the purpose statement on the IYA website.

The International Year of Astronomy 2009 is a global effort initiated by the International Astronomical Union and UNESCO to help the citizens of the world rediscover their place in the Universe through the day- and night-time sky, and thereby engage a personal sense of wonder and discovery.

As an amateur astronomer, I am very excited about the potential of such an effort. To that end, I am adding a second new years resolution to my list, and that is to get out with my telescope and show off the sky to anyone who will care to stop by and look and talk. I have always found "sidewalk astronomers" to be good people, committed to raising awareness of the planets and moon and sun and ultimately, of science.

A highlight of the IYA will be "100 Hours of Astronomy" in April. From the IYA website: This is a 100-hour, round-the-clock, round-the-globe event that includes live webcasts from research observatories, public observing events and other activities around the world. I will certainly plan to do some public work such as sidewalk astronomy. I expect there will be local, national and international events as the date draws nearer. I'll post to the blog as I hear about interesting events.
Posted by The Urban Astronomer at 10:50 1 comment:

I awoke this morning shortly after 5:00 and dressed warmly to see the first meteor shower of 2009, the Quadrantids. I had just been reading about this shower the night before and it sounded like it would have an impressive peak at 5:00 pacific time. The conditions looked good from inside my house, so I ventured to my backyard and looked high into the north-east. It took only a minute or two before I was rewarded for my efforts: a pinpoint of light streaked across the sky for an instant. I was energized and focused and saw a particularly bright one a minute later. In my brief 15 minute session, I saw about 8 meteors. By then the first light of dawn was beginning to color the eastern sky and I was ready to hop back into bed!

Meteors are a delight from my point of view for a variety of reasons. They are high-speed astronomical events, those rare things you can encounter in the sky that are fast and require you to pay attention, like a total solar eclipse. Meteors are quick and yet they leave the impression of a long trail in your eye (sometimes the long streak is real, but often it is just a visual memory). My favorite thing is that they are silent. I always expect them to make a sound like an exploding firework, but despite the fact that we are witnessing mass vaporizing in an explosion of heat and brightness, nearly all meteors make no sound. The occasional fireball that is of massive proportion (such as a recent fireball over Canada) are the extremely rare spectacles that might create some local sound.

Meteor showers are annual events that are specifically tied to a time of year and a location in the sky from which the meteors all appear to radiate. For 2009, I am going to make a point of seeing more of these. Typically meteor showers peak after midnight and are best seen when there is no interference from the moon. So for the 10-12 major showers that occur in a year, the phase of the moon will make some of them easier to see than others. Of course, weather plays a role like it does for any other astronomical viewing - the clearer the atmosphere, the better the viewing. And of course the darker the sky, the more meteors you will see. Last night was a chance alignment of nearly all these factors: no clouds, clear atmosphere and no moon. So I jumped at the opportunity to enjoy the sight of the Quadrantid meteors. Even in the city lights of San Francisco the conditions were favorable enough to see some.

The informative astronomy website EarthSky has an excellent summary of the major meteor showers in 2009. Mark your calendar and plan to see a few - they are truly beautiful to witness.
Posted by The Urban Astronomer at 12:08 1 comment: