Watching the Solar System in Action 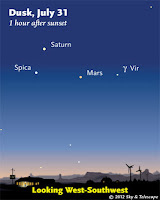 As we move into August, we can witness the gradual change in the night sky from one evening to the next as planets near and far align and move among the backdrop of stars in the heavens. In particular, Mars is moving quickly in its path around the Sun, and as it does so in early August, it will move just between a pair of bright objects, the star Spica and the planet Saturn. The diagram illustrates the position at the end of July, and the spacing between Mars and the pair will close as we move into August. This is a superb opportunity to witness the motions in our Solar System as we on Earth move around the Sun (making the trio of planets and stars appear lower in the sky each night), and Mars moves eastward with respect to Saturn.

Image courtesy of Sky & Telescope.
Posted by The Urban Astronomer at 00:09 No comments:

Wherever you live, there are always good astronomy events happening in your town. The Night Sky Network is the first resource you should check for the latest events anywhere in the world.

Every weekend, the observatories and science museums in the San Francisco Bay Area open up for public viewing, such as the Chabot Space and Science Center and Foothill College Observatory.

Lecture: In the San Francisco area, I always encourage people to visit the monthly meetings of my astronomy club, the San Francisco Amateur Astronomers (SFAA). Every month we have some of the best astronomy speakers present their latest ideas, and this month is no exception, with a science history talk presented by John Dillon entitle "Galileo Reconsidered" on Wednesday July 18th. Click here for more details.

Lecture & Star Party: Once a month at the top of Mt. Tamalpais in Marin County, high above the thick fog of a San Francisco summer's night, you can find a wonderful Saturday night event featuring a lecture in the Mountain Theater, and stargazing with the SFAA afterwards. This Saturday, July 21st, features Dr. David J. Des Marais from the NASA-Ames Research Center. The tile of his talk is “Astrobiology Investigates Life in the Context of Space.” Click here for more details.

I hope you can join us for an upcoming event.
Posted by The Urban Astronomer at 23:49 4 comments:

Beauty in the Dawn Skies

The next few days feature a fine lineup of Moon and Planets in the dawn sky. As the Earth swings around in its most distant stretch of its orbit (we were at aphelion last week), the constellation Taurus gradually becomes visible in the morning sky, with its bright star Aldebaran rising just ahead of the Sun. Looking in that direction of the sky, the giant planet Jupiter is present near the "V" of Taurus, as well as the planet Venus, fresh off of the Transit and now heading westward from our point of view against the backdrop of stars. These bright objects are visited by the crescent Moon for a few days this weekend, so take a moment and look east if you are up before the sunrise.

Image courtesy of Sky & Telescope.
Posted by The Urban Astronomer at 16:02 No comments:

Planets moving along the Ecliptic

Looking into the evening sky, two planets are visible in the south-west and are heading toward a 'conjunction' in August when they will line up with a bright star. Mars is the faster-moving of the two, changing position each night against the backdrop of stars as it travels around the Sun roughly every two Earth years. In a previous blog post, I noted the position of Mars in the constellation Leo, where it emerged from retrograde motion in April and has been moving steadily east each night since then. Last week I showed its position in another blog post highlighting how far it had traveled from Leo, now moving into Virgo. And in one month, during the middle of August, Mars will finally arrive between Saturn and its stellar neighbor Spica, creating a wonderful sight.


But these milestones are just the highlights that punctuate the journey. In fact, looking out each night at Mars is quite wonderful, seeing it shifting its position along the ecliptic, illuminating the pathway of the planets, Sun and Moon across the zodiac band in our night sky. I point this out to guests at the California Academy of Sciences when I give talks there during NightLife each Thursday, and this is one of the most inspiring things people discover as they look up in the sky with me -- that they can actually see the motion of Solar System objects by just looking up and paying attention to what they see.

If you want to learn more about Mars, and the upcoming landing of the Mars rover Curiosity, check out the Night Sky Network page called "We're Mad About Mars!"

Image courtesy of SkySafari.
Posted by The Urban Astronomer at 13:58 No comments: