Now that the summer constellations have fully emerged, I am enjoying the sparkling views at night as I look from one horizon to the next. Last week I focused on the eastern horizon while conducting a Star Party at Mt. Tam, but the next night I was in my yard viewing the south-western sky, and was so amazed by the view.

In early summer, Leo is diving down toward the western horizon, with the familiar lion shape almost face-down. Mars has been steadily moving eastward across the ecliptic, from its springtime position near Regulus in Leo, now more than half-way to Spica in Virgo and a lineup with Saturn in August.

Bright Spica and Regulus, with the planets Saturn and Mars between them, create a beautiful string of bright shiny objects low along the south-west, and from my backyard in San Francisco, the view to the south-west is fairly dark, so everything was just right in the sky as I gazed in that direction. To the left (east) Scorpius is coming up into view and later in the evening dominates the southern horizon -- but I'll have more on that in a future post. And directly above, you can enjoy the dazzling star Arcturus and the lovely Northern Crown just nearby (Corona Borealis - - read more here). Just below Virgo is the easy-to-spot constellation Corvus. The sky is full of wonder, and summer weather makes it more fun and relaxing to see the sky. Wherever travels take you this summer, dedicate an evening to star gazing and reward your senses with the beauty of the heavens.

Image courtesy of SkySafari.
Posted by The Urban Astronomer at 15:43 No comments:

It’s been a full lunar cycle since the Annular Eclipse of the Sun in May, and now the Moon once again graces the evening sky with its slender disk, slicing below the ecliptic in a line just south (left) of the planet Mercury and the star Regulus. I enjoy spotting the very young Moon such as we will see on Thursday 21st, not just in the glow of dusk alongside the emerging planets and stars, but also in the mid-day sky where it is high above, near the summer Sun. Finding the young disk of the Moon in the daytime sky takes patience and focus, but with a well-placed location next to a building or tree that solidly blocks out the bright Sun, the thin Moon is a treat to find.

Image courtesy of Sky & Telescope.
Posted by The Urban Astronomer at 15:52 No comments:

Transit of Venus on June 5 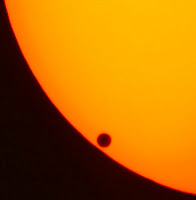 It's showtime! 8 years ago, the planet Venus passed in front of the Sun, and now it's time for the second of the pair of transits before a 105-year break. The view from San Francisco and the west coast of the US will be very fine, with the event visible in the western sky starting around 3:00 pm until sunset.


I spoke with Ben Trefny of KALW radio about the Transit of Venus. You can listen to it here.

Much is being written about this transit. It fits into the category of 'unique and rare astronomical events' that are special and worthwhile to see if only for the rarity of the event. Venus makes two transits of the Sun every 100+ years, and the last one of this pair (8 years ago) was not visible in San Francisco, so Tuesday June 5th is a special opportunity to see this event. The website transitofvenus.org is an outstanding resource, as is Sky & Telescope with their historical writeup of past transits. Safe viewing tips can be found here on EarthSky.

I am going to take part at an event co-sponsored by the San Francisco Amateur Astronomers and NASA Ames in Mountain View. And there are many more places to see the transit with amateur and professional astronomers around the San Francisco Bay Area - thanks to this list from the AANC. However, if you don't get out to an event, no need to worry. You won't need a telescope to see this, just eye protection as you would use during any solar viewing, and you will easily spot the disk of Venus moving slowly across the Sun's surface. Make the effort; the next chance will be in 2117.

Image courtesy of Wikipedia.
Posted by The Urban Astronomer at 10:25 2 comments: