Young Moon, Jupiter and Venus shine in the West

The next few evenings feature a beautiful alignment of the two bright planets Venus and Jupiter, and the young Moon as it starts its monthly journey around the Zodiac. Every 29 days, the Moon makes a 1.6 million mile journey around the Earth, and as it does, it travels across the entire Zodiac, the band of constellations through which the Sun and planets appear to "travel" around our nighttime sky. Each month following the New Moon phase, the young Moon slips quietly into the evening sky, first appearing near the horizon as a thin sliver of light, and each night growing in size and distance from the setting Sun. This month, with Jupiter and Venus in close proximity, the changing view from one night to the next promises to be beautiful. Now all we need in San Francisco is clear skies!

Image courtesy of Sky & Telescope.
Posted by The Urban Astronomer at 18:22 No comments:

Ring of Fire Roadtrip and the San Francisco Amateur Astronomers 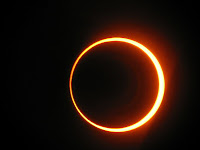 In just two months, the western United States will witness a special astronomical event, a "Ring of Fire" solar eclipse, also called an Annular Solar Eclipse. This particular kind of eclipse is the result of an exact alignment of the Sun, Moon and Earth, but unlike a Total Solar Eclipse in which the sky turns to night and the Sun's corona becomes visible, an Annular Eclipse brings us a different spectacle in which the inner 90% of the Sun is blocked out by the Moon, leaving an eerie "Ring of Fire" in the sky.

The event takes place on Sunday May 20th and although San Francisco and many parts of the western US will see a very deep Partial Solar Eclipse, you will have to travel to Northern California to see the full 'Annular' effect in which the Moon is centered in the disk of the Sun.

My local astronomy club, the San Francisco Amateur Astronomers, is sponsoring a "Ring of Fire Road Trip" for those who'd like to join the club and view the May 20th eclipse from the Mt. Shasta area, several hours north of San Francisco. If you'd like to learn more about this, check out the newly-redesigned SFAA website and make plans to see this special event.

By the way, the SFAA conducts monthly lectures, star parties and special events like the Ring of Fire Roadtrip. Check out the website for the latest events, including a lecture this Wednesday March 21 by NASA Astronomer Jeffrey Van Cleve on the topic of Near Earth Objects. Most SFAA events are open to the public and we welcome you to join us for a talk, a road trip, or a night under the stars at one of our upcoming Star Parties in San Francisco or high atop the fog on Mt. Tam, about 45 minutes north of San Francisco.

I hope to see you at an upcoming event.

Image courtesy of Wikimedia Commons / Sancho Panza.
Posted by The Urban Astronomer at 15:44 No comments:

Jupiter and Venus in Conjunction

The gradual changes that occur in the night sky are generally imperceptible to all but the most thorough observer. So at special times like this week, when we have a close-encounter of two of the brightest objects in the sky, we are able to see the grand pace of the Solar System at work in our own backyards. Jupiter and Venus, the two brightest objects in the night sky after the Sun and Moon, reach conjunction this week and fill the western sky with their brilliance. The chart shows the relative change each night, as Venus, much closer to the Earth, swings around in its orbit higher into our evening sky, while distant Jupiter drops a bit lower each night in comparison. It's one of those times that it will be very obvious and easy to see the change of planetary position from one night to the next.

Image courtesy of Sky and Telescope Magazine.
Posted by The Urban Astronomer at 18:54 4 comments:

Tonight Mars is at opposition, a once-every-25-month event in which Earth passes between the Sun and Mars, and we observe Mars at its closest approach. The patterns of alignments of the Earth with different planets is a very cyclical event, every year or two depending upon the proximity of Earth to that planet.

The relative distance from Earth to Mars at each opposition is also something that is quite cyclical. You might recall in 2003 claims that the "Mars is going to be as big as the full Moon" during that year's very favorable opposition. In fact, the disk of Mars was never that big, but hype aside, Mars appeared quite large compared to any other time in recent history. In 2012, opposition brings us Mars as a bright orange star in the east shortly after sunset, traveling across our night sky from horizon to horizon. Although it is at the closest until 2014, it is just a small dot of color through most home-based telescopes. You will need considerable power to see the polar ice caps and other surface features (such as in the photograph). My friends in the San Francisco Amateur Astronomers (SFAA) club live for such moments, and if you can visit a local observatory or visit a star party this time of year, I am sure Mars will be one of the highlights.

The next time Mars nears the size of its famous 2003 opposition is in 2018. Until then, enjoy Mars however big or small it looks. It's a fascinating planet.

Photo by Mark Killion.
Posted by The Urban Astronomer at 20:15 2 comments: