Over the past years in this blog, I have focused on information and news that can be used by city dwellers, guiding them to find interesting happenings in the night sky that are generally visible in light-polluted skies. I also have focused on San Francisco and West Coast US-based events such as eclipses. In addition to my own posts, I recommend a number of other astronomy sites with helpful information along the same lines, for the casual and amateur astronomer who wants to enjoy the night sky and learn something new about the universe.

Lately, I have been particularly fond of the Astronomy Picture of the Day, always bringing a fantastic new image to light, and the website Spaceweather.com, with interesting news focused on our Sun and the local region of our Solar System with updates on Near Earth Objects. As we approach a solar maximum over the next 18 months, I find Spaceweather.com full of exciting updates about aurorae and sunspots. Sky & Telescope Magazine has been a mainstay for me for years, and the website always includes the latest things to see in the night sky. I often reference images from the Sky & Telescope feature "This Week's Sky at a Glance." And I am enjoying the very interesting posts on the EarthSky blog, such as this great article on "10 Things You May Not Know About Stars."

I hope that you can find a lot of interesting reading and enjoy new perspectives on astronomy. And check in regularly for another post from me (about once a week) with my own musings on the joys of the night sky. I wish you clear skies and happy viewing!
Posted by The Urban Astronomer at 12:46 No comments:

Venus is growing brighter in the west each evening, a brilliant evening 'star' that commands your attention as you see the sunset sky darkening. I enjoy the game of finding Venus right after sunset, particularly from Ocean Beach not far from my home in San Francisco. If you have a good western horizon, Venus is well-placed above and to the left of the point of sunset. I find that just a few minutes after the sun has set, I can often find Venus, knowing that this time of year, the Moon and planets that are in the west shortly after sunset are, in fact, nearly 'above' the Sun since the path of these objects (the Ecliptic) is at a wide angle above the horizon. The image showing the position of the Moon and Venus on January 24, 25 and 26 gives you a sense of how great the angle of the Ecliptic is in the winter.

You can use this concept to help you find Venus after sunset, and see just how many minutes after the sun sets that you can spot that shimmering point of light we call our sister planet.

Image courtesy of Sky & Telescope Magazine.
Posted by The Urban Astronomer at 22:59 3 comments:

Planets wandering through the Zodiac

I've been fascinated by the movement of planets through the zodiac lately, showing this to guests at star parties and when I give talks at the California Academy of Sciences. Jupiter, being the dominant planet in the evening sky, brings my attention to the constellation Aries, which from an urban setting is two somewhat-bright stars paired next to blazing Jupiter. Following the ecliptic toward the east, you find a series of beautiful and bright constellations including Taurus, Gemini and Leo. By the time Leo is rising in the late evening, Mars rises with it, a distinctive orange-red color in contrast to the white and blue-white stars of Leo. By early morning when I first look outside, Virgo has risen, and along with it, Saturn. 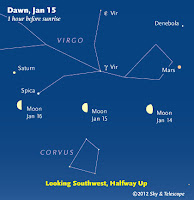 Jupiter has a wonderful pattern of travel through the zodiac, moving one 'sign' per year as we observe it in its 12-year long journey around the Sun, seeing the slowly changing backdrop of stars along the ecliptic. By stark contrast, Mars flits rapidly from one constellation to the next, out of Leo and into Virgo in the coming weeks. And by contrast in the other way, Saturn lumbers along gradually changing zodiac position every 2 1/2 years, moving from Virgo at present to Libra in 2014.

EarthSky has a nice writeup on seeing all 5 visible planets in January. Enjoy the month and get outside if it's not too cold. As for me, I've been entranced by the clear nights here in San Francisco and look forward to the ongoing winter skies and the bold bright planets that punctuate the view.

Image courtesy Sky and Telescope.
Posted by The Urban Astronomer at 08:20 1 comment: