"Journey to the Stars" at the California Academy of Sciences 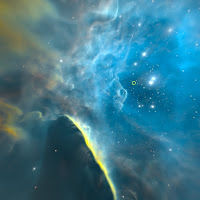 The latest show at the California Academy of Sciences (CAS), "Journey to the Stars," premiers on September 26th. The CAS, in conjunction with the American Museum of Natural History (AMNH) in New York, created an excellent visual and scientific experience for all ages, yielding an impressive work that both teaches and amazes with its sharp, detailed images of the life cycle of stars.

The Morrison Planetarium at the CAS is an all-digital theater with a 75 foot dome that transforms itself into the night sky and transports the audience to the far reaches of the galaxy. I continue to marvel at the way in which new technology and research are being combined by the AMNH and CAS to bring the latest astronomical and cosmological discoveries to mainstream audiences in a way that makes the science interesting and vivid. For example, during "Journey to the Stars" I was very impressed with close-up visits to the Orion Nebula and Helix Nebula in which the audience gets a close-up view of the depth and breadth of these star-forming regions of space. Classroom learning about star formation is one thing; seeing the amazing photographs such as the Pillars of Creation from the Hubble Space Telescope is 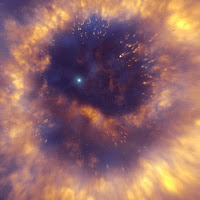 another; but the interactive view of these places with the advanced digital imaging that you see in "Journey to the Stars" is, in my view, extraordinary.

The show runs many times daily and I strongly urge anyone with an interest in science and astronomy to head out to Golden Gate Park to take in this riveting show.
Posted by The Urban Astronomer at 06:16 No comments:

Venus, the brilliant morning "star", dominates the morning sky. During the next week it will have a close encounter with the waning Moon and then a very close alignment with Regulus, the brightest star in the zodiac constellation Leo. Now that the sunrise is getting later each morning, it's not so unusual to get up when it is dark enough to see brilliant Venus in the eastern sky. The diagrams will help you to find your way in the eastern sky.

Posted by The Urban Astronomer at 01:56 No comments:

Get involved: AANC astronomy lectures and star party on September 12

Here's a chance to dive into astronomy and hear from the scientists that are making news right now. The Astronomical Association of Northern California (AANC) is opening the first day of its annual meeting to the public on Saturday September 12th at the Westin Hotel at SFO in Millbrae. The day features a broad range of talks about astronomy, from imaging of the heavens through the Hubble Space Telescope, to the Search for Extraterrestrial Intelligence (SETI), to the upcoming NASA Lunar Impactor mission (LCROSS mission), and the history of the telescope. Also there will be telescopes for solar observing during the day and a star party in the evening (lead by yours truly). Register online - high-school age students are Free. Visit aancstars2009.org for details.
Posted by The Urban Astronomer at 22:40 No comments:

Saturn has no rings!

If you could get a good telescopic view of Saturn today, you would find that it has no rings. At least that would appear to be the case for several days as another rare phenomenon takes place in the Solar System. Of all of the beautiful objects in the sky, Saturn is one of those wonderful heavenly targets that can be seen from cities and country, from spacecraft and flying telescopes, and always impresses the viewer. The second largest planet in the Solar System, Saturn has the largest and most distinctive ring system (Jupiter, Uranus and Neptune also have ring systems). The detailed photographs sent back to Earth from the Voyager and Cassini spacecraft and the Hubble Space Telescope have given us stunning perspectives into the depth and intricacies of the Saturnian ring system.

Saturn's ring system is very thin (less than 50 feet thick), and when viewed 'edge-on' from Earth it is virtually invisible. Saturn, like Earth, has a tilt in its rotation such that it has seasons as it moves around the Sun in its 30-year orbit. Consequently, every 15 years we see the ring system from the side and for a short while it disappears from view altogether. Although the ring system is very thin, it is extremely wide -- about 170,000 miles across, making the system even bigger than Jupiter!

Saturn is currently moving its way westward across the constellation Leo the Lion and is not visible due to its proximity to the Sun in the morning sky. It will gradually emerge from the glare of the dawn and be visible before sunrise. By the end of the year it will be rising in the east just before midnight and by next spring will be a gorgeous evening object with its ring system back in view. Until then, enjoy Jupiter and its fascinating moon system -- except when they aren't there!
Posted by The Urban Astronomer at 20:47 No comments:

Jupiter has no moons!

Tonight Jupiter will have no moons. At least that will appear to be the case for a short while, as a rare phenomenon takes place in which all of the four bright moons of Jupiter will not be visible for viewers on Earth.

Any night of the year that Jupiter is visible, you can usually spot several of the four Galilean moons. Io, Europa, Ganymede and Callisto are big enough that they are easy to find in a telescope or even binoculars. The inner three moons, Io, Europa and Ganymede orbit Jupiter very rapidly, in 2, 4 and 8 days respectively. So on any given night the relative position of the four moons changes and the pattern of the four moons around Jupiter - from our point of view - is always in flux. The above image from Sky and Telescope Magazine helps to illustrate this.

To make things more interesting, as a moon passes directly in front of Jupiter or behind it (or in the shadow of Jupiter) it becomes invisible for a few hours. This evening from 7:00 to 12:00 pacific time, the moons will be invisible for some period of time, with all four moons being out of view from 9:43 until 11:29 pacific. If you have a telescope or binoculars, use them to catch the changing pattern of the moons and witness this unusual alignment.

Jupiter, by the way, can be easily spotted tonight as the bright "star" in the east near the full Moon.
Posted by The Urban Astronomer at 09:00 2 comments: