Viewing all 5 Visible Planets in one night

As the nights grow longer and the skies darker, we have the chance for the next few weeks to see all five planets visible to the naked eye in a single night. Of course, there are seven planets in our Solar System (not including Earth), but two (Uranus and Neptune) are just too faint to see without optical aid. However, the rest (Mercury, Venus, Mars, Jupiter and Saturn) are spread around the entire sky, adding a lot of brightness to our already-shiny Autumn and Winter skies. This article in the science blog EarthSky is an excellent guide to help you find each planet. Of course, to find Jupiter and Venus you need little guidance because they are so bright, but Mercury, Saturn and Mars will be easier to find with some assistance from a sky map.

And if you are ready to look deeper and see all 7 in one night, here is a chart to guide you to Uranus and Neptune. They are both just west of Jupiter, in the constellations Pisces and Aquarius.

Image courtesy NASA.
Posted by The Urban Astronomer at 17:03 2 comments: 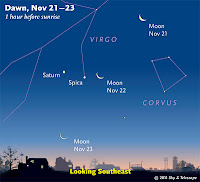 Saturn has returned to the morning sky, rising higher each day shining in the east before sunrise. It is near the bright blue giant star Spica, in the constellation Virgo, and this week is graced by a visit from the Moon, creating a beautiful grouping on the morning of November 22nd.

Saturn and Spica are an interesting pair to compare. They are a contrast in color, with Spica shining a deep blue, and Saturn with a yellow-white tinge. Spica is 260 light years away, distant compared to many other bright stars in the evening sky, but being a giant star, it emits enough light to be the 15th brightest star in our night sky. Saturn is 80 light minutes away, a giant planet by Solar System standards, but due to its distance it never shines as bright as other Solar System objects such as Venus and Jupiter. But Saturn still captivates all who see it through a telescope because of its impressive ring system, making it a welcome target for any star gazer.

Image courtesy Sky & Telescope Magazine
Posted by The Urban Astronomer at 09:36 No comments:

The Leonid Meteor Shower peaks on November 17th, bringing fast meteors to the late night sky. This shower is generally a good one for stargazers, but the glare of the waning Moon will hide some of the fainter meteors. Nonetheless, a meteor shower brings all kinds of meteors, faint and bright, long-tailed streaks and short blips of light, so with some commitment and a dark sky, you will be rewarded with at least a few good meteors if you take some time to look.

Get a sleeping bag, comfortable chair or pad, and enjoy the sight late on the night of Thursday 17th into the morning of the 18th. The radiant of this eclipse, the constellation Leo the Lion, is above the horizon after 9 pm and high in the sky after midnight, and although the namesake constellation appears to be the "source" of the meteors, in fact the Leonids will be visible in every direction, so the best view is to simply look straight overhead. I'll give it a go from my backyard here in San Francisco, a nice way to close out my birthday :-)

This excellent article in The Universe Today provides a lot more backgound information, as does this article from National Geographic.

Image courtesy Stardate.org.
Posted by The Urban Astronomer at 21:27 No comments:

We have a special event coming our way, literally. An asteroid by the name of YU55 will speed near Earth on Tuesday 8th, perhaps even becoming visible for those with a good telescope and a clear view to the west. David Perlman's article in the San Francisco Chronicle includes some very helpful information how to find this, as does Kelly Beatty's writeup in Sky and Telescope.

This is a fairly rare fly-by of an asteroid. There are 1000s of "Near Earth Objects" (NEOs) being tracked. Tiny objects like meteors are commonplace, impacting Earth daily, and causing no harm as they burn up in the atmosphere. But the NEOs are larger, potentially causing considerably greater harm if they were to collide with Earth. Happily, all NEOs that are being tracked at this time are not on a collision course with us. YU55 will pass quite close by cosmic measures, within the orbit of the Moon. At 1/4 mile in size, an impact by YU55 would cause major damage on Earth, but we need not worry. And the next close fly-by of an asteroid is not expected until 2028, with a similar 'miss by a mile' outcome. Sleep well!

Posted by The Urban Astronomer at 23:21 4 comments: