We have two special moments this week in the heavens, moments that attract public attention because they are transition points in the cycles of nature. As Earth orbits the Sun, and the Moon orbits the Earth, we are aware of changes in the relationship between these bodies, and the special alignments that come and go. This week, we experience the Summer Solstice in the northern hemisphere, and also a Super Moon, a full moon that coincides with the closest approach of the Moon to Earth.

Solstice is a special moment, driven by the Earth's tilt with respect to its orbit around the Sun. The 23 degree tilt of Earth's axis brings about considerable change in the length of time the Sun is above the horizon, and obviously that affects weather, and affects how people live, in particular in northern latitudes. Solstice marks the seasonal shift from lengthening days to shortening days. June 21st marks the moment this year when that happens. 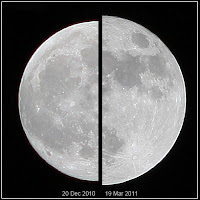 Super Moons are a popular thing now, and this too marks a special moment, a transition in the Moon's orbit around the Earth when the Moon reaches the closest point on its elliptical path, and appears larger in the sky. Along with the somewhat larger size in the sky comes an increased impact on tides, and groups such as the California King Tides Initiative have worked to raise awareness of global warming by measuring the impact of high tides on coastal communities. This month's Super Moon occurs on the night of Saturday June 22nd to the morning of Sunday June 23nd, when the Moon reaches perigee (closest approach to Earth) within a few minutes of the moment of Full Moon.

The heavens are full of moving objects, from the planets in the Solar System, to asteroids and comets, and even galaxies and stars. All of this motion creates patterns and alignments that are beautiful to behold. And the transitions between key alignments make for interesting moments to ponder our place in the universe.

Posted by The Urban Astronomer at 08:07 No comments:

The early summer skies feature a fascinating constellation that climbs high into the night sky and provides several interesting features to see with the naked eye, binoculars or a telescope. Hercules is the Roman mythological hero that is adapted from the Greek hero Heracles. In the night sky, he is kneeling in the sky with a club overhead, engaged in battle with other mythological enemies throughout the heavens. Similar to Orion the Hunter, Hercules has a distinctive shape; in stark contrast to Orion, Hercules has no bright stars - no first magnitude stars, and only one that is barely second magnitude, and hence Hercules takes some effort to find. But it's worth the effort.

Hercules is visible due east after sunset in June, and is directly overhead by midnight. The middle four stars form a distinctive shape, well known to astronomers as the Keystone. This trapezoidal shape is the center of the figure of Hercules, and it contains a beautiful deep space object known as Messier 13, the Great Globular Cluster in Hercules. It is a spectacular sight to behold in binoculars or a telescope; M13 is a rich cluster that shimmers from the 300,000 stars located in it.

The stars of Hercules are not particularly bright, but they are quite interesting. One of the brightest stars is called Rasalgethi, and it is a a binary star system with a red giant star and a companion that orbit each other every 3,600 years. The brightest star is called Kornephoros, a yellow giant star 148 light years from Earth.

Exploring the heavens is more fun when you know what to look for. Spend a few minutes on Hercules with a telescope or binoculars, and you'll see plenty of interesting objects, even from within a big city.

Image courtesy of SkySafari.
Posted by The Urban Astronomer at 12:58 No comments:

Transitions in the Evening Twilight

Every night, the sky appears a bit different to us, and in June as the long days of summer unfold, the sunset sky changes more rapidly than usual. The trio of planets that dominated dusk are now a pair, as Mercury and Venus climb higher into the west, and the bright stars and constellations of winter rapidly fade from view.

The bright twin stars Castor and Pollux in the constellation Gemini are dropping gradually into the western sky after sunset, and the later and later onset of darkness combine with the change in position to speed these two stars out of view over the coming days. As they are lower and lower each night, Venus and Mercury will move higher each night and over the next 3 weeks, they will move closer to each other.

As you watch the changing landscape in June, take note of the gradual slowing in the onset of darkness as we approach the summer solstice later this month. The evening sky is a beautiful place to see transitions, and the visiting planets this month provide a fine guideline for this.
Posted by The Urban Astronomer at 06:42 No comments: