Posted by The Urban Astronomer at 22:48 No comments:

Conjunction of Venus and Jupiter 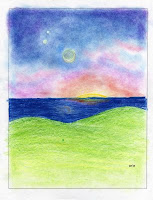 Venus and Jupiter will have a conjunction at the beginning of the month of December. What is a conjunction? There are many uses of the term in astronomy, and here we use it to describe when two planets are very near to each other because they are on the same line of "longitude." I put the word longitude in quotes because in astronomy, we use a coordinate system similar to latitude and longitude, but the proper names are declination and right ascension. Therefore, when two planets have the same right ascension, we call that a conjunction.

The sketch (made by my daughter) depicts the sky as it will appear shortly after sunset on November 30th just as Jupiter and Venus are moving toward their closest approach. The scene will be made all the more beautiful by a young crescent moon just below the two planets. The next night, December 1st, the Moon will have moved just to the left and above the two planets. Both nights will be perfect for telescopic viewing, as the young Moon with its cratered surface (usually accompanied by earthshine) is always a beautiful sight, and you can see Venus at gibbous phase and Jupiter with its four bright moons. As mentioned in a previous post, these three objects with their special traits are three of Galileo's most famous discoveries with his telescope in the early seventeenth century.
Posted by The Urban Astronomer at 21:59 No comments:

Don't wait: Use your telescope now 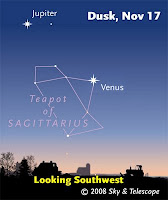 This month offers a great opportunity to dig out that old telescope that you've rarely used and put it to work. Jupiter and Venus are putting on a show that will be of interest to anyone who has ever marveled at the heavens. These two planets are moving closer and closer and at the end of November will form a very compact grouping with the crescent Moon. What will you see?

Venus is brightening as it gradually moves closer to Earth in its orbit. Because it is nearer to the Sun than the Earth, it never climbs too high in the sky. For the rest of 2008 it is a brilliant evening "star", dominating the western horizon just after sunset. Jupiter, on the other hand, is much more distant from the Sun than the Earth and therefore over a year can be seen in all parts of the sky, moving gradually against the backdrop of stars but not nearly as quickly (from our Earth-bound perspective) as Venus. Jupiter has spent 2008 in the constellation Sagittarius and the diagram shows its present location, moving east of Sagittarius toward Capricorn.

Each evening for the next few weeks you will be able to see Jupiter and the background stars of Sagittarius gently drift toward the Sun while Venus holds its own. The combined effect is that Jupiter will move closer and closer to Venus. It is an experiment that requires nothing more than taking a moment each evening (or every couple days) to look west after sunset and note the relative position of these two bright objects. They are much brighter than anything else in the sky so you should not have any problem finding them. On November 17th Venus makes a very close encounter with one of the brighter stars in Sagittarius.

The evenings of November 30th and December 1st are particularly noteworthy as the young crescent Moon makes a close "fly-by" of the two planets, something that should be dazzling to see with a telescope or binoculars. Jupiter, of course, is impressive with its four bright moons, and Venus is always fascinating because it goes through phases just like our own Moon. By end of month, Venus will be a waning gibbous phase as it moves closer to Earth and slowly becomes a crescent over the next several weeks. Happy viewing!
Posted by The Urban Astronomer at 16:25 No comments: