The Moon amid planets and star clusters

The morning sky this week will be rich with easy-to-spot celestial objects in the hour before sunrise. Find a good view toward the eastern horizon and use binoculars to enhance the view of Venus, Mars, the waning crescent Moon and two of the finest star clusters in the sky, the Pleiades and Hyades. I am looking forward to it!
Posted by The Urban Astronomer at 18:36 No comments:

Get Involved: Public Nights at Observatories, Stargazing at the Libraries and Museums

There are many ways to get involved with astronomy, and I want to provide some links to get you going places.
First, some places where I present astronomy. I am a regular at the California Academy of Sciences most Thursdays at their NightLife event. These are for adults-only (sorry, kids, they serve alcoholic beverages), and when the skies are clear, they have astronomers with telescopes trained on stars and planets, and me giving tours of the night sky. Stop by on a Thursday night and enjoy the Cal Academy, and journey up to the Living Roof for a personal tour from me.
I make special presentations for organizations around the Bay Area, this week at the Marina Public Library as part of the IMBIBE series of events being put on by the Friends of the San Francisco Public Library. Come join me Friday night, June 17th, to see our nearest star (with its fascinating Sunspots) up close, and when the skies turn dark, a close up view of other celestial highlights.
Local observatories and science museums hold regular astronomical viewing nearly every weekend. Chabot Space and Science Center has viewing on Friday and Saturday nights through their powerful telescopes. The Peninsula Astronomical Society hosts viewing at the Foothill College Observatory in Los Altos Friday nights. And the Lawrence Hall of Science has viewing on Saturdays. Finally, my own club, the San Francisco Amateur Astronomers, hosts a monthly Star Party at Mt. Tam in Marin, along with a lecture at the Mountain Theater. I often give tours of the night sky at the Mt. Tam star parties.
There's no excuse if you live in the Bay Area. And if you are not in the San Francisco Bay Area, check the Night Sky Network to find a club and activities near you.
Posted by The Urban Astronomer at 10:15 No comments: 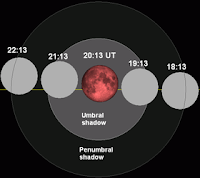 On Wednesday June 15th, viewers in the eastern hemisphere will be treated to a very long-lasting Total Lunar Eclipse, a 100-minute marathon of an eclipse that will reveal the center of the Milky Way in the backdrop as the bright Moon is enveloped in the darkest part of Earth's shadow. Unfortunately for those of us on the other side of the Earth, including here in San Francisco, we will miss the entire eclipse. (But we will get a nice lunar eclipse later this year, on December 10th.)
As for June 15th, this particular Total Lunar Eclipse will be longer than most for two reasons, (a) the Moon passes nearly through the center of the Earth's shadow, and (b) the Moon is nearly at Apogee, when it is farthest from the Earth (and hence appears a bit smaller than usual and takes longer to pass through the Earth's shadow). For my colleagues in Germany, the Moon will rise already in mid-Eclipse, which is an outstanding sight that I have seen one time in the past. Moonrise will be at approximately 9:30 pm, and the Moon remains in total eclipse until approximately 11:00 pm. That would be something to enjoy from a spot with a good eastern horizon. For other locations around the world, use this chart from the NASA Eclipse Web Site to determine the timing for your location. I wish my friends on the other side of the world clear skies and happy viewing!
Posted by The Urban Astronomer at 14:38 2 comments:

KFOG's Irish Greg and I talk about Saturn and a Double Star, the Big Dipper and asterisms, a fun event where I'll be showing off the night sky, observatories that have public viewing nights, and a massive solar flare. Listen here. A good time is guaranteed!
Posted by The Urban Astronomer at 09:56 No comments:

Light-polluted skies allow us city dwellers to only see the brighter objects in the night sky. Luckily, there are plenty of bright objects to see, and for the next few weeks Saturn has a close-encounter with a fairly bright double star. It's time to get out your telescope and put it to work, for the reward will be worth it.
The double star, Porrima, is a double star system located about 40 light-years away, relatively close to the Sun in the grand scheme of things. The two stars orbit each other about every 170 years, and as they do so, the apparent distance that separates them changes (from our Earth-bound point of view). Right now, the two are well separated, meaning that with a telescope pointed at Saturn you will see the two stars as distinct objects. Only a few years ago, their alignment was such that you would have needed a very powerful telescope to see the two stars in the Porrima system as individual stars. Right now, if you put Saturn into view in a small to medium telescope, you will also get the Porrima system in your field of view as well.
The diagram (above) illustrates where to find Saturn and Porrima over the next few days, and this article from Space.com also provides insight and additional diagrams to help you see this sight.
So seize the moment and be an amateur astronomer for a night, making a fun discovery for yourself.
Posted by The Urban Astronomer at 10:58 2 comments:

Email ThisBlogThis!Share to TwitterShare to FacebookShare to Pinterest
Labels: Saturn

Twin Stars and Moon in the West

As the days lengthen and the sky stays lit well into the evening, many familiar constellations are rapidly slipping out of view. The bright twin stars of Gemini, Castor and Pollux, are fading fast and will soon be gone from the night sky. Enjoy a few days of this sight, with the addition of a fine young Moon in the sunset sky this weekend.
Posted by The Urban Astronomer at 17:49 1 comment:

Eclipse Season: Three Solar and Lunar Eclipses all in a row

For most people it is a surprise to learn that Solar and Lunar eclipses are quite frequent events. Every six months we have an "Eclipse Season" in which we have two or sometimes three eclipses over the course of a few weeks, depending on the exact geometry of the Sun-Earth-Moon trio. June is one of these months, starting with a Partial Solar Eclipse (today), then a Total Lunar Eclipse mid-month, and finishing with a Partial Solar Eclipse (actually in July, but just hours after the end of June!).

Eclipses are indeed common for Planet Earth, but for a given fixed location on the planet, eclipses are less common. For example, the first eclipse (Solar) of June is visible only from the very far north regions of the planet. The Total Lunar Eclipse mid-June will be visible primarily in the eastern hemisphere, so for those of us in San Francisco, it will take place during the day when we cannot see the Moon. And the final (Solar) eclipse of this eclipse season will be visible only in a small region of the globe deep in the southern hemisphere.

Eclipses come in "seasons" because they can only happen when the Moon is precisely positioned to cast its shadow on the Earth, or when the Moon passes precisely through the Earth's shadow. As the Moon's orbit is not exactly aligned with the Earth's orbit, the two orbits (and shadows) come into alignment for a few weeks every six months. The rest of the time, the shadows of the Moon and Earth miss each other and we are eclipse-free!

Since eclipses are such dramatic events, when they are visible in your area, you should go out of your way to see them. For us in California, the next good eclipse will be a Total Lunar Eclipse on December 10th. More on that when the date draws nearer.

Meanwhile, if you want to know more about upcoming eclipses, visit the excellent on-line resource from NASA. The NASA Eclipse Web Site is filled with detailed information about solar and lunar eclipses, including maps, charts, and exact timing for each event. Another excellent resource is the EarthView Eclipse Network. The image (above) is courtesy of the EarthView Eclipse Network.

Posted by The Urban Astronomer at 09:23 No comments: