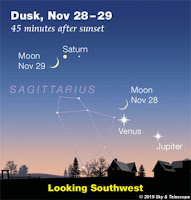 Jupiter, Venus, Saturn and the Moon put on a good show this week in the evening sky. To see this you will need a very good western / southwestern horizon and clear skies. As Jupiter and Saturn recede into the sunset sky a bit lower each evening, Venus is racing out of the glow of the sunset sky and emerging as our evening 'star' for December and the coming months.

Of course, the planets and the Moon all occupy roughly the same path across the sky, so when planets align the Moon is often not far away. On Wednesday and Thursday and Friday the Moon will closely pass below and then above the Jupiter-Venus conjunction and then a day later, Saturn. The young Moon is always a treat to view in binoculars or a telescope, and having Venus and Jupiter and Saturn nearby will make the apparitions all the more exciting. The challenge here is that you will need to look very shortly after sunset, because within an hour most of these objects will set. Daily sky maps are here. 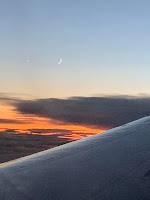 Follow Up Note: on November 28th I was on a plane flight above Germany and took this photo looking south west during the flight. The Moon is nicely placed between Venus and Jupiter. Venus is quite easy to find but Jupiter takes more work. Note that the Sky & Telescope diagrams (above) are based on the view from the US, so the Moon is past Venus, whereas I saw the alignment many hours earlier when the Moon was still between the two planets.

Posted by The Urban Astronomer at 13:52