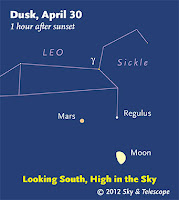 This April, as the weather has improved and I've been conducting star parties, I've found myself focusing on some striking pairs of planets and stars that punctuate the night sky this spring. The pairs are all located in the Zodiac, the band across the sky that houses the well-known 12 signs, and also the planets and the Moon. The pairs of planets and stars are easy to find, and when you find them, you get a big picture of the band of the Zodiac, with the planets in our Solar System superimposed upon that band.

If you trace a line from Saturn through Mars, and then toward the North-West through Gemini and to the brilliant planet Venus, you will be tracing out the path of the planets along the night sky, through the band of constellations we call the Zodiac, and along a line in space called the Ecliptic. It's a great way to get acquainted with the heart of our night sky, and this week you can watch the Moon gliding through the same space, as it makes its 29 1/2 day journey around our home planet.

Images courtesy of Sky & Telescope.
Posted by The Urban Astronomer at 10:30

Those images are really helpful, I didn't know Sky & Telescope had such great resources, I'm sorta new to all this.

hi Eric - I try to link to Sky & Telescope and other excellent on-line resources. I am glad you find these helpful. Best of luck!